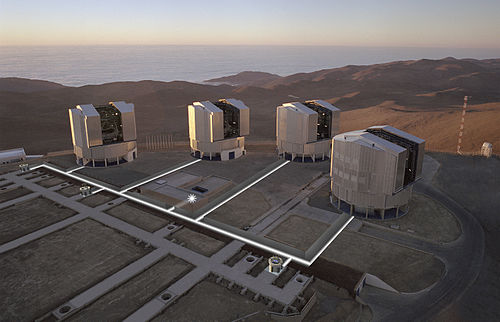 telescope in the Atacama Desert, Chile

The Very Large Telescope (VLT) is a telescope facility operated by the European Southern Observatory on Cerro Paranal in the Atacama Desert of northern Chile. The VLT consists of four individual telescopes, each with a primary mirror 8.2 m across, which are generally used separately but can be used together to achieve very high angular resolution. The four separate optical telescopes are known as Antu, Kueyen, Melipal, and Yepun, which are all words for astronomical objects in the Mapuche language. The telescopes form an array which is complemented by four movable Auxiliary Telescopes (ATs) of 1.8 m aperture.