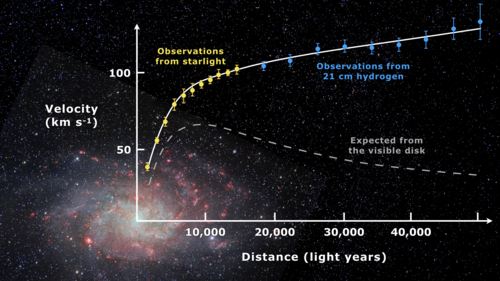 The rotation curve of a disc galaxy is a plot of the orbital speeds of visible stars or gas in that galaxy versus their radial distance from that galaxy's centre. It is typically rendered graphically as a plot, and the data observed from each side of a spiral galaxy are generally asymmetric, so that data from each side are averaged to create the curve. A significant discrepancy exists between the experimental curves observed, and a curve derived by applying gravity theory to the matter observed in a galaxy. Theories involving dark matter are the main postulated solutions to account for the variance.