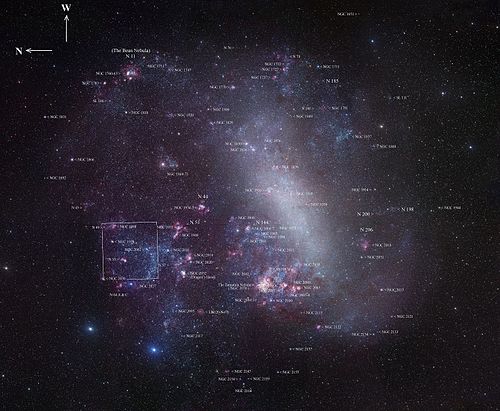 The Large Magellanic Cloud (LMC) is a satellite galaxy of the Milky Way. At a distance of about 50 kiloparsecs (≈163,000 light-years), the LMC is the second- or third-closest galaxy to the Milky Way, after the Sagittarius Dwarf Spheroidal (~16 kpc) and the possible dwarf irregular galaxy known as the Canis Major Overdensity. Based on readily visible stars and a mass of approximately 10 billion solar masses, the diameter of the LMC is about 14,000 light-years (4.3 kpc), making it roughly one one-hundredth as massive as the Milky Way. This makes the LMC the fourth-largest galaxy in the Local Group, after the Andromeda Galaxy (M31), the Milky Way, and the Triangulum Galaxy (M33).