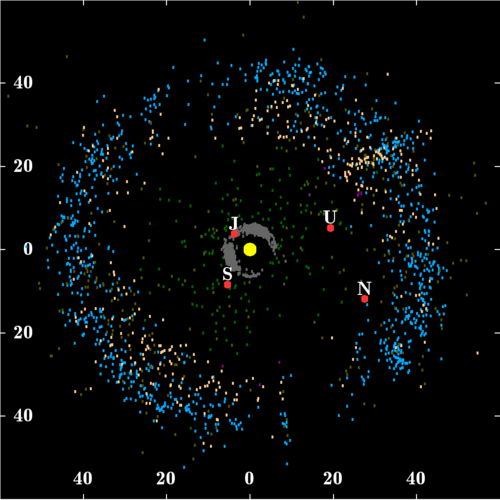 Area of the Solar System beyond the planets, comprising small bodies

The Kuiper belt, occasionally called the Edgeworth–Kuiper belt, is a circumstellar disc in the outer Solar System, extending from the orbit of Neptune to approximately 50 AU from the Sun. It is similar to the asteroid belt, but is far larger – 20 times as wide and 20–200 times as massive. Like the asteroid belt, it consists mainly of small bodies or remnants from when the Solar System formed. While many asteroids are composed primarily of rock and metal, most Kuiper belt objects are composed largely of frozen volatiles, such as methane, ammonia and water. The Kuiper belt is home to three officially recognized dwarf planets: Pluto, Haumea and Makemake. Some of the Solar System's moons, such as Neptune's Triton and Saturn's Phoebe, may have originated in the region.