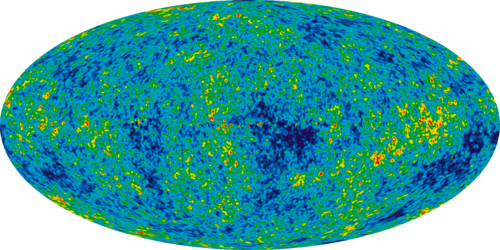 The cosmic microwave background, in Big Bang cosmology, is electromagnetic radiation as a remnant from an early stage of the universe, also known as "relic radiation". The CMB is faint cosmic background radiation filling all space. It is an important source of data on the early universe because it is the oldest electromagnetic radiation in the universe, dating to the epoch of recombination. With a traditional optical telescope, the space between stars and galaxies is completely dark. However, a sufficiently sensitive radio telescope shows a faint background noise, or glow, almost isotropic, that is not associated with any star, galaxy, or other object. This glow is strongest in the microwave region of the radio spectrum. The accidental discovery of the CMB in 1965 by American radio astronomers Arno Penzias and Robert Wilson was the culmination of work initiated in the 1940s, and earned the discoverers the 1978 Nobel Prize in Physics.