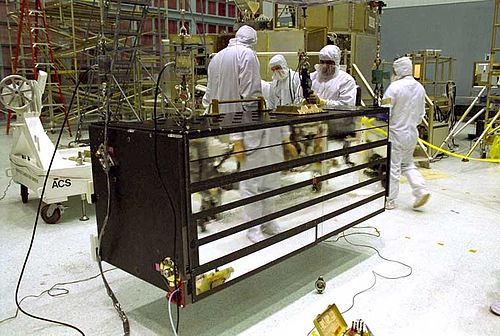 The Advanced Camera for Surveys (ACS) is a third-generation axial instrument aboard the Hubble Space Telescope (HST). The initial design and scientific capabilities of ACS were defined by a team based at Johns Hopkins University. ACS was assembled and tested extensively at Ball Aerospace & Technologies Corp. and the Goddard Space Flight Center and underwent a final flight-ready verification at the Kennedy Space Center before integration in the cargo bay of the Columbia orbiter. It was launched on March 1, 2002 as part of Servicing Mission 3B (STS-109) and installed in HST on March 7, replacing the Faint Object Camera (FOC), the last original instrument. ACS cost US$86 million at that time.